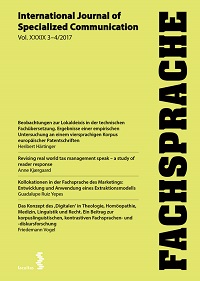 The present study explores structures of local deixis in scientific and technical texts. Its particular focus is on the translational implications arising from the use of local deixis in European patent specifications, a frequently translated LSP genre with a high degree of linguistic standardization. The database is a corpus of 40 complete original (i. e. non-translated) texts covering four of the most important languages in the patent translation market: English, German, Spanish and Italian. The results show that, in all the four languages, a considerable semiotic effort is made in patent specifications in order to minimize patterns of referential ambiguity due to local deixis. In particular, all language corpora were found to contain a broad variety of genre-specific combinations of verbal and non-verbal deictic reference serving this goal. The study confirms that these semiotic features have a positive effect on the translatability of local deixis. In this context, light is also shed on the benefits gained from using CAT tools for the translation of local deixis in patent specifications.

Most read articles by the same author(s)